I am having problems with purple, well violet acrylic paint. If I mix it with white it’s fine, but doesn’t behave by itself, until I water it down. But then the paint doesn’t cover the canvas very well. I need more paint.

The other day, my fight was with orange. It was too bright, then I ran out of yellow ochre and my ginger cats became day glow orange. Then the cats’ eyes went weird, still unhappy with attempt two. Resisting desire to start all over again.


Why can I have a draw full of paint, but still struggle to find any that hasn’t dried up or gone weird? Note to self, stop buying cheap little tubes of paint from The Works.</br></br>
I have a lovely watercolour set, that behaves, but I’m not very good with it. I love oil paint but don’t have the patience to let it dry, and jars half full of noxious chemicals being left around the house, is probably not good for my insurance?

Might have to start selling my work soon, or maybe open a gallery in my shed? When I look behind me, I can see a row of cat paintings staring at me. Thankfully some of them are sleeping. 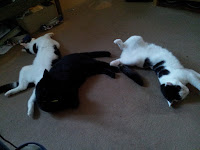 I currently have three cats Mischief and Mayhem (The not-so Terrible Twins), and The Evil Overlord Zebulon (Minus one fang), and an occasional fourth if you count Trouble, a little cat the others invite in of dinner. I never had a cat growing up, I lived with two uncles and a grandfather who were very anti-cat. My grandfather was a keen gardener, I did everything he could to keep cats away. We always had dogs, though. Years later my two uncles ended up with living with a cat, which my mum owned, the dear departed Lucy. They very begrudgingly grew to love her. 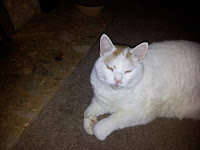 So I left home at eighteen, I think it was less than a week before a pretty tabby kitten called Vellcrow appeared. She spent a lot of time stuck to my leg or claiming curtains hence the name. She was an amazing cat, playful and friendly. She must have moved house with us more than ten times over the years! 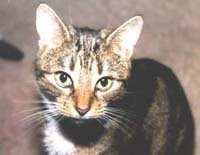 Then soon after getting Vellcrow, a friend gave us a now third-hand Persian cat named Leelou, she liked to blow snot on your feet, and hours’ worth of grooming, would be undone in minutes, as she licked herself back into one big tangle. Then came Angus, a black cat with much attitude. You could carry him around like a baby, but would also pee on anything he viewed as his, including me! He also had a very intimate relationship with an old duvet cover and a toy Dracula doll.

Vellcrow spawned 4 kittens (yes we learned the neutering lesson the hard way!), she was a great and very proud mum. She would carry the kittens to us, with a look what I have done, attitude. The kittens were originally named little-vellcrow (brown tabby, white feet), little-angus (black), and feet (grey tabby, white feet) and no feet (grey tabby). We ended up keeping little-vellcrow, briefly named Duck and finally called Moragg. And no feet was briefly named Squid and finally called Hamish. Poor little Moragg was the runt of the litter, she had a bit of her nose missing so sneezed all time, and was very small. She only lived about 5 years. We loved her despite her problems. 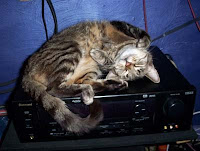 Hamish was a big, friendly, plush ball of stripey love. Possibly my favourite cat ever. He had a pet toy hedgehog that he would carry around and sing to. He lived with us until he was old and slow, still miss him. 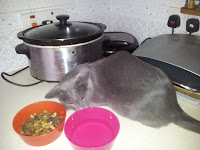 For two years we added a beautiful but very vocal gentleman called Dorian, he was a very posh stray. An Oriental Shorthair. He was very much an outside cat, we when we got moved into a tower block he went to live with a friend and her daughter. He now shouts at them instead! Then finally we come back around to Zebulon and the twins. I would adopt more cats in a heartbeat. I’ll tell you about the dogs and snakes another time!
Posted by Unknown at 14:26 No comments:

My Own Imaginary Friends

My main imaginary friend when I was a small child was a rat called Templeton, he was a character from the book Charlotte’s Web. I think I had the film on VHS? Templeton was at least as big as me, so maybe 3 – 4 foot? He seems slightly terrifying to me now as an adult.

Templeton had an active social life, even beyond my own imagination. He would, of course, join me on my walk to school, play on the swings in the park. And possibly slightly more unusually, join my grandfather in the pub on a Sunday evening. Other imaginary friends, included an entire civilization that lived in an envelope, they were possibly paperclips? I got very upset when people touched my envelope, but that couldn’t be helped as this micro universe was named ‘pick-up’. Then I had a dragon that lived in my bedroom wall, by the side of my bed. I was slightly scared of the dragon, but he had promised not to eat me. I think the deal was he could eat any of the other imaginary creatures that also lived in my bedroom? Some days it was rather busy? 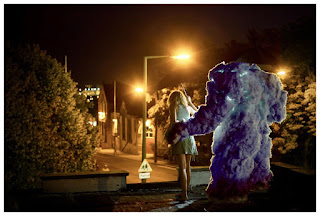 Of course, the bottom of the garden contained fairies, and a magic worm called Woo. Many wars were waged and monsters defeated amongst the vegetable patches. I briefly had a door handle named Donnie, and remember being very upset when nobody came to his birthday party. I promise you I had real human friends as a child too. But I am very pleased that my imagination still has that spark that no doubt brought my slightly more unusual friends to life.
Posted by Unknown at 07:50 No comments:

A Little House of Cats 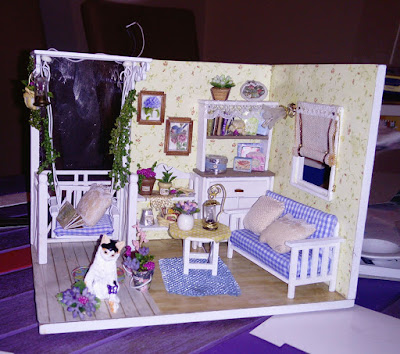 I am making a doll's house. But I think it will be mainly occupied by cats and dogs. I bought the kit off Wish, but you can also buy it from Amazon and it's all in Chinese, extra level of fun and confusion. Not sure what room to do next? Probably a kitchen, a living room or bedroom? I haven't tried wiring up the lights yet. The whole thing only cost me £7, including postage from China. They are thankfully LED, so shouldn't get hot. But the whole thing is made of paper, fabric and very smelly glue! I don't have suitably sized dolls. Why do I find the idea of making little dolls creepy, but I'm fine with an empty house full of little toy cats?
Posted by Unknown at 10:23 No comments: